Uterine cancer is one of the common cancer among women and unfortunately this cancer is increasing. The surgery can treat the uterus cancer. This surgery is called hysterectomy.

Hysterectomy is used to remove the women’s uterus and treat the uterus cancer.

During total hysterectomy, the entire uterus will be removed. This is the most common kind of surgery.

During this surgery, doctor removes the uterus, vagina and cervix. This surgery is used for women who have cervix cancer.

During this surgery, doctor removes the portion of uterus.

In this surgery, doctor removes the uterus by creating the incisions on abdomen.

During this surgery, the incisions create inside the vagina and no scars are seen.

Hysterectomy is done under the general anesthesia. The success of the surgery depends on the surgeon’ skill and size of the uterus.

In some cases, there is no need of removing the ovaries, and doctor just removes the uterus. This surgery has direct impact on women’s health, because the hormonal secretion will be continued even until menopause. 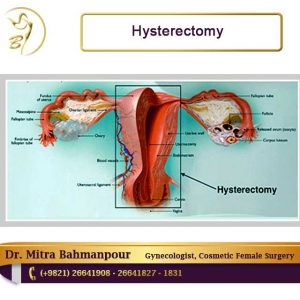 Sometime, this surgery is done by removing one ovary, and so the hormonal cure is not needed. But in some patients, both ovaries should remove. In this way, lack of hormonal secretion results in some symptoms such as:

It should be noted that, the surgical area should be dry.

Pap- Smear is a selective test that used to diagnose the cancer. Then a gynecologist performs some surgeries such as removing some parts if the uterus and then laboratory will determine the samples. Patients with positive results, should do surgery, chemotherapy or radiotherapy.

Hysterectomy is done for those who are older and won’t able to be pregnant.

To perform surgery, the gynecologist uses one of these 3 following procedures:

The gynecologist, Dr. Mitra Bahmanpour, believes that the vaginal hysterectomy has short recovery time than the radical hysterectomy.