Uterine fibroids size, varies from small that are undetectable by human eyes, to too large and bulky size. Women can have one or many fibroids together. Most women have no information about the uterine fibroids, because they have no symptoms. So, the gynecologist detect the fibroids by doing pelvic examinations or ultrasound tests.

Most women have fibroids with no symptoms. Signs and symptoms varies based on the location, size and number of the fibroids. But common symptoms are as following:

In some cases, fibroids can cause severe pains.

There are different types of uterine fibroids based on the size of fibroids:

What are risk factors of uterine fibroids?

Doctors don’t know the exact causes of the fibroids. But some factors that affect on the problem are as:

Estrogen and progesterone are two hormones that increase during menstrual period and before pregnancy, and then affect on the fibroids growth.

Insulin, is one of the growth factors that affects on the fibroids growth.

Doctors believe that, fibroid develops from a single stem cell in the uterus. In fact, stem cell divides repeatedly and then results in creating bulky fibroids. 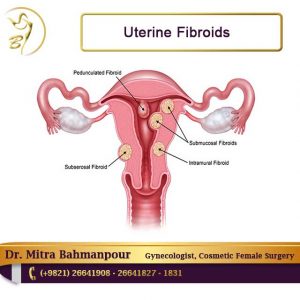 Factors such as bad diet, race or other environmental factors can affect on the fibroids growth.

During pregnancy, and due to hormonal changes, uterus becomes large and then results in uterine fibroids.

Fibroids can damage the red and white cells and result in bleeding and white cell destruction. In this way, cysts are produced and women may experience severe abdominal pain.

Enlarged fibroids increase risk of abortion during first three months. Based on the location and size of the fibroids, may appears some problems during childbearing, such as fetal delivery.